• Fights inflammation of the joints and muscles

What is Goji?
Known as the “smile and happiness berry”, Goji (also called Lycium barbarum and common boxthorn) has been known for its extraordinary healing powers for thousands of years. Goji is related to the potato and the tomato and belongs to the nightshade family. Ancient Tibetan manuscripts and Buddhist texts mention the amazing peculiarities of its slightly sweet and sour berries, which are extremely delicious and nutritious. A handful every morning is enough to be happy and cheerful until the evening! In the early 1990s, Goji was recommended by the dieticians of Hollywood stars like Madonna and Kate Moss. This berry has caused a stir around the world, thanks to its anti-aging, anti-cancer, immunostimulating, rejuvenating, antidepressant and sleep-regulating properties.

What are the bioactive molecules of common boxthorn?

According to traditional Chinese medicine, the common boxthorn is the most nutritious food that has been discovered to date! Its fantastic nutritional quality contains a long list of components important for life. Goji contains 18 amino acids, including 8 essential, which are indispensable for the synthesis of proteins, enzymes, neurotransmitters and hormones; 8 polysaccharides, including 5 unique (LBP), which regulate and stimulate the immune and cardiovascular system; 5 carotenoids (betacarotene, lutein, zeaxanthin, cryptoxanthin and xanthophyll) which have a positive effect on visual acuity and the circulatory system and are powerful antioxidants; 22 minerals and trace elements (calcium, phosphorus, potassium, iron, copper, zinc, selenium, germanium); 6 vitamins (C, B2, B3, B6, B12 and E) which are indispensable supplements for the metabolism; Beta-sitosterol and other phytosterols, which regulate blood pressure as well as the metabolism of glucose and cholesterol and are anti-inflammatory; solavetivone and cyperone, bactericidal and fungicidal agents; physalin stimulates the body’s natural defenses and proper function of the blood system, and has proven to be effective against human cancer cell growth.

Why should you take Goji?

Goji is a powerful antioxidant.

Antioxidants are molecules that reduce the damage caused by free radicals in the body. The latter are highly reactive substances which play a role in the occurrence of cardiovascular diseases, some types of cancer, and age-related diseases. Oxidation and attacks by radicals are a source of carcinogenic mutations and cause serious cell damage. By measuring the ORAC value (Oxygen Radical Absorbance Capacity) one can determine which foods have good antioxidant properties. In order to fight off free radicals from attacking the body, according to experts one should consume 5,000 ORAC units per day. However, the recommendation to eat 5 servings of fruit and vegetables per day only supplies 1,700 units. To achieve the daily ORAC value, 2,294 g of apples (i.e., about 22 pieces) should be eaten every day…or just 20 grams of Goji. The ORAC value shows that Goji berries contain more antioxidants than other fruits and vegetables. Their molecules prevent premature aging and combat the harmful effects of free radicals throughout the body.

Numerous studies have shown that the unique polysaccharides of Goji (LBP) accelerate the activity of some cells of the immune system (T lymphocytes, macrophages, and NK cells) tasked with destroying pathogenic microorganisms. They increase both the innate as well as the adaptive immune response. In addition, Goji polysaccharides stimulate the production, multiplication and differentiation of the cytokines (hormones of the immune regulation) and help in the fight against infectious diseases. The polysaccharides of Goji also strengthen your immunity through their antioxidant effects. The immunomodulating properties of Goji point to another beneficial effect of this fruit: its defense against cancer.

Recent studies show that Goji can be effective in the treatment of prostate, lung, kidney, and colorectal cancer, as well as against malignant melanoma. Among 79 subjects with advanced cancer, the response rate of patients taking anti-cancer treatment with Goji was 40.9% versus 16.1% in patients who received only a tablet. An in vitro study from 2009 shows that the polysaccharides of Goji (LBP) accelerate the apoptosis (self-destruction) of cancer cells by up to 41.5% and inhibit the progression of prostate cancer. It has also been shown that Goji inhibits the growth of human leukemia cells and hepatocellular carcinoma. In addition, Goji increases the response to radiotherapy and strengthens the immune system of cancer patients.

Researchers have credited Goji with the ability to slow aging. It has been proven that its bioactive molecules stimulate the pituitary gland. Among others, this endocrine gland is responsible for the excretion of “youth hormone” (growth hormone). This substance has many beneficial effects, including the reduction of adipose tissue, improving sleep and memory, accelerating the healing process and restoring libido. In several studies with elderly people, daily Goji intake improved the appetite of 95% of patients over three weeks. Some 90% slept better, while 35% regained their sexual energy.

In addition, Goji stimulates the DNA repair process (our genome). Since DNA is the most important substance in our bodies, it carries the blueprint for all inherited traits. It ensures that our cells reproduce exactly like healthy, carbon-copy images. Chemical products, environmental influences and free radicals can cause DNA damage and gene mutations, cancer, and premature aging. It is thought that the polysaccharides of Goji can affect DNA damage by reducing oxidative stress. In a study from China involving elderly people, Goji intake increased the activity of superoxide dismutase by 48%. This is a strongly antioxidative enzyme. At the same time, the concentration of harmful oxidized lipoproteins was reduced by 65%! An American experiment conducted in 2009 shows that the blood levels of antioxidant enzymes such as SOD (superoxide dismutase) and GSH-Px (glutathione peroxidase) significantly increase (as a result of Goji consumption over 30 days) in comparison to the placebo group. This suggests that Goji plays a significant role in the prevention and reduction of free radicals.

Goji exerts a beneficial effect on the nervous system

As a “smile and happiness berry”, YYX is a natural euphoric that is proven to be very effective against grumpiness and “bad mood”. The common boxthorn is recommended for chronic fatigue. It improves sleep and contributes to zest for life. Goji relieves headaches and migraines. It has been shown to be effective in the treatment of Alzheimer’s disease. Thanks to Goji, the tremors associated with Parkinson’s disease can be significantly reduced. It also appears that the regular consumption of Goji may delay epilepsy attacks.

Goji is a potent inhibitor of lipid peroxidation. This process causes a strong accumulation of “bad” cholesterol in the arterial walls, which often leads to heart attacks and thromboses. It has been shown that Goji regulates blood pressure, decreases the plasma concentrations of triglycerides, total cholesterol, and LDL cholesterol, and increases the levels of HDL cholesterol.

Chinese scientists have shown that Goji can reduce the time the eyes need to see in the dark. It also improves vision in semi-darkness. Strong carotenoids (lutein and zeaxanthin) in Goji protect against macular degeneration and cataracts. They also act as antioxidants and filters against UV rays, which are thought to liberate toxic free radicals.

A substance in Goji called “Cerebroside” protects the liver cells from some toxic chemical products (e.g., carbon tetrachloride). In addition, Goji contributes to the elimination of bile stones. It is a particularly effective adjuvant for the prevention of poor liver function, since it has both antioxidant properties and a protective effect on the liver. This function is very important, since the liver is the main organ for detoxification of the body.

Goji soothes redness, reduces age spots, and combats eczema, psoriasis, and anxiety. In the case of a cut wound, injury etc., Goji accelerates healing. Goji is rich in minerals and trace elements and can therefore significantly improve the health of the fingernails after a few months of treatment. The common boxthorn is excellent for healthy hair. It relieves itching of the scalp and prevents dandruff. Several elderly people reported that they were gradually recovering their old hair color. This indicates that Goji can prevent the loss of hair color and graying of the hair. Goji is very good for the teeth, prevents tooth decay and relieves toothache.

Goji is recognized as a treatment for infertility in both sexes. The polysaccharides of Goji protect the testicles and increase both the amount and quality of sperm. As the number of sperm drops over the years by 1% per year (i.e., 50% reduction within 50 years!), consumption of Goji is very valuable. In the case of prostate cancer (the most common cancer in men), Goji causes the cancer cells to self-destruct and inhibits their growth and multiplication. Goji is very effective against painful menstruation and makes menopause more comfortable for women. In Asian medicine, Goji is considered to be one of the main plants for strengthening sexual function, and enjoys a legendary reputation in helping to attract lovers to each other. An old Chinese proverb warns men who are far from their wives and families: “He who walks a thousand miles from home should not eat Goji berries!”.

Many assume that the body fluids of healthy people have a slightly alkaline PH value. Taking pills, stressful situations and an unbalanced diet cause the body to become acidic. Goji restores the acid-base balance of the body and combats acidosis, and has proven to be effective against heartburn.

In addition, Goji also combats all types of digestive problems: bloating, heartburn, flatulence, colic and bad breath. It promotes passage through the intestines by stimulating the muscles that are responsible for peristalsis.

The polysaccharides from Goji regulate the blood glucose value. They also improve the metabolism of carbohydrates and insulin. Goji also contains betaine, which can prevent hepatic steatosis and cardiovascular problems that are common in diabetics.

Be the first to review “Goji Berry” Cancel reply 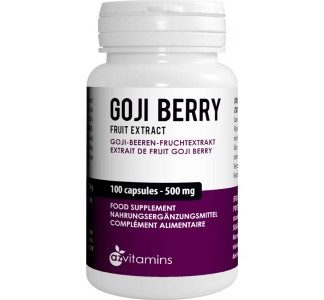