Now ANYONE can lose weight – as much as they want!

For everyone that wants to instantly lose weight and never gain it back again!

There are people who can seemingly eat anything and as much as they want, and simply don’t gain weight. On the other hand, there are people who restrain themselves when eating, give up certain foods – and still can’t stop getting heavier. And this happens even if they exercise and count calorie

This made something clear to this exceptional scientist: when it came to being fat, what was decisive was not how much or how little someone eats – the reason has to lie elsewhere!

A study in Miami showed: Without exception, all individuals who evidenced severe to very severe obesity lack a very specific bacteria in the gut. One that’s found in yogurt, among others – meaning it’s wholly natural. Its name: Lactobacillus gasseri!

There’s no getting around the new Bacto-Slim® slimming capsule. Test it now, entirely without risk. The only thing that matters is your satisfaction.

Be the first to review “Bacto-Slim” Cancel reply 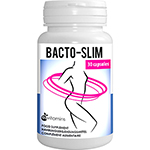